Welcome to Macken’s department store, a world of sequins, bunions and sales targets where “the customer is always right”. One day on the shop floor. A day so jam-packed it is bursting at the seams, and the workers feel as disposable as the clothes they sell. What’s all the fuss about the new contracts anyway? They’re called “zero hours”…
A whirlwind solo show by Stage UK Best Solo Performer nominee in the Edinburgh Fringe 2012. Come delve in the hidden world behind the super friendly smiles of our department stores. Laugh, weep and scream!
Ka-chinka-ching!

Poems and Extracts from Pablo Neruda by Theo Dorgan
Theo Dorgan (born 1953) is an Irish poet, writer and lecturer, translator, librettist and documentary screenwriter.Among his awards are the Listowel Prize for Poetry, 1992 and the O’Shaughnessy Prize for Irish Poetry 2010. A member of Aosdána, he was appointed to The Arts Council / An Chomhairle Ealaíon in 2003.[5] He also served on the Board of Cork European Capital of Culture 2005.
Theo will be reciting his own poetry and will also be reading extracts by Chilean poet Pablo Neruda. 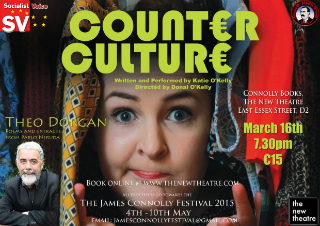 Written and Performed by Katie O'Kelly