Poison is inspired by gay maudit Jean Genet (who also makes a brief appearance in Violette in this season of the Film Qlub), and it borrows one scene from The Miracle of the Rose, a purportedly autobiographical book set in the Fontevraut prison (there’s no evidence that Genet was ever there) in France during WWII, which reviews the joint beginnings of Genet’s career as a burglar, and as a homosexual. Genet’s work smashed the demand on gay men and women to adopt the highest standards of civility in order to compensate for their depravity. Here was a criminal, who considered his profession as a thief a sacred calling. Here was a homosexual, who thought of himself as a lucky man.

Genet actually made a short silent film set in a prison, the beautiful A Song of Love (1950), which brought poetry to the unlikely subject of gay male anonymous sex. Genet was an amazing thinker and a brilliant writer – much of the impact of his work lies in his defiant reclaiming of lawlessness, violence, and trouble, as not just worthy, but holy. For many persecuted and conflicted homosexuals, this strange moral sommersault opened up the possibility of sanity and dignity.

The film Poison is an idiosyncratic and compressed history of homosexual representation, organised in three-parts: ‘Hero’, about a seven year old who shots his father for no apparent reason, ‘Horror’, about a heterosexual mad scientist who is transformed by an experiment into a psycho-killer leper, and ‘Homo’, about an ambiguously presented sexual encounter in a generic all-male prison.
Despite its haphazard look and feel, Poison takes very seriously the various ways in which homosexuality has reached the media, considering in turn how gay people have been crucified by tabloids, poked at by B-movie horror films, and fleshed out by porn. Poison embraces them all. Fantasy, satire, horror, erotica, thriller, comedy, science fiction, drama, romance. There is room for everything in Poison, because even in the little choking space left between the walls of homophobia, there is always enough room to soar. 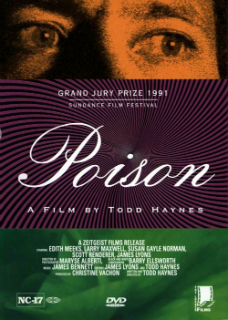