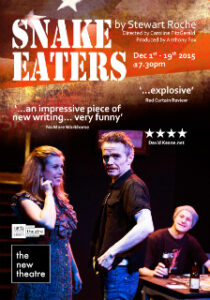 Snake Eaters, by well known playwright Stewart Roche, directed by Caroline FitzGerald, is a play about violence, love, and the scars that you cannot see. It runs in The New Theatre from Nov 30th – Dec 19th.
About the Play
Hillis, a US Marine, returns home from a disastrous tour of Afghanistan that has left most of his platoon dead. He struggles to settle back into normal life in a town he barely recognizes, his psychological wounds preventing him from communicating with his father and old friends. However, a chance meeting with the fiery Ashley starts him on the road to some sort of recovery. But as Ashley has dangerous baggage all of her own, it’s only a matter of time before Hillis is forced to confront his past and all the demons that lurk there.
The play is set in the present day Nebraska.
Deadline is Friday August 28th
Please send CV & headshot to thenewtheatre1997@gmail.com
Sides available on the day. Preparation of monologue not necessary. Each actor will be given time to look at sides beforehand.
Payment will be discussed at auditions.
LIST OF CHARACTERS:
–HILLIS: (30’s Male) Former career Marine, recently returned from Afghanistan.
–DON: (Late 50’s, male) Hillis’ father. Widowed.
–JOEY: (30’s male.) Hillis’ best friend. Owned his own bookstore, which has been bought out by Barnes and Noble.
–ASHLEY: (Mid 30’s Female) Knows Joey and Hillis from High School. Has had some encounters with law enforcement in the past.
–AUSTIN: (Not age specific. Male) Small time drug dealer who may or may not have killed someone.
–KRUGER: (Not age-specific. Male) Austin’s boss who has definitely killed someone.
–GLOCK: (Mid to late 20’s. Male) Former Marine, in Hillis’ company in Afghanistan. From Chicago.