The Village People, made of six spaced-out men from New York’s gay neighbourhood Greenwich Village, each adopting a favourite fantasy gay role (biker, cowboy, construction worker, policeman, indian, army recruit), took over the world in the eighties. They have inspired boys and girls, and anyone in between, for three decades now – from the ‘drag king’ explosion to The Petshop Boys. If you danced to the bouncy ‘YMCA’, ‘Go West’, ‘Macho Man’, and ‘In the Navy’ when they topped the charts in the eighties, you will have a blast watching this movie. If you are too young to remember the Village People, we pity you!

Can’t Stop the Music! is a camp classic, and an unfairly forgotten celebration of a time when being gay meant life was fun-fun-fun! The film has an in-your-face silliness which has been often imitated but never surpassed. We guarantee that your jaw will hit the floor before you can say ‘mamma mia’. Let yourself be carried away by the insane fabulousness of those musical numbers, and (a bonus for Irish audiences specially arranged by the Dublin Film Qlub!), gasp at the unlikeliest version of ‘Danny Boy’ you will ever hear. Just what the doctor ordered for your post-Eurovision blues. 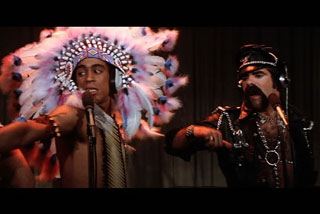