Home  /  Theatre   /   Sunday Morning Coming Down
Back to events

Mick Donnellan’s play Sunday Morning Coming Down is a dark comedy that is both poignant and sad: it takes you inside the home of the McGuire’s, a family struggling to deal with the scourge of alcoholism and the social pressures that come with it. The Play initially caught the eye of the Druid Theatre company in 2009 who commissioned a sell out public reading. Having received a good reaction, and being afforded a chance to see the work brought to life, Donnellan took the decision late last year to bring it to the stage under his own production company – Truman Town Theatre. Casting took place in January and a six person hugely talented group has been assembled for the upcoming production.

Sunday Morning Coming Down is a rural Play set in the small town of Ballinrobe, Co. Mayo. It centres around the McGuire family and their often comic attempts to perform as a functional family in a house dominated by alcohol, religion and social pressures. John and Chris are brothers but live very different lives.

John has just returned from a six month teaching placement in Italy but Chris has remained in the town to work in a slaughterhouse. Their divergent lifestyles become apparent through their conversations and attitudes toward whisky. Joe, their father, is the gravedigger and alcoholic that’s married to Theresa, the lad’s mother. Their marriage is a struggle at best and Joe often outperforms even the worst type of ageing Irish drinker. John is convinced he’s only home for a week but Sharon, his ex-girlfriend, arrives back on the scene to set doubts in his mind. The walls begin to close as the date for his flight back looms ever closer. Chris is adamant to see his brother save himself and return to Italy, while Sharon wants him to stay and “make a go of it”. Joe’s violent descent into the bottle only adds to John’s anxiety and consistently drives the family apart.

Presenting us with razor sharp wit and a tight character driven story, this show is a rollercoaster of comedy, tragedy, and the hilarity often associated with the darker side of a small Irish town. At times fiercely dark, and others sharply poignant and sad, this Play offers enough ingredients to set the stage for a feast of drama and a heart breaking crescendo that will resonate with its audience for a very long time.

About Mick Donnellan (Writer/Director)
Mick completed the M.A. in Writing at NUIG in August 2004. Since then he’s been writing full time. His background in theatre includes working with Druid under the New Writers Programme and having Sunday Morning Coming Down staged as a public reading in July 2009. After living abroad for sometime (wrote a couple of novels, set up a now thriving Arts Paper in Vancouver, Canada) he returned to Ireland last July to concentrate on his writing here. Since then – he has worked as a Screenwriter with RTE for the Storyland Short Film competition and set up his own Theatre Company ( Truman Town Theatre.) He believes in minimalist theatre accentuated with strong sharp dialogue and a tight plot that snaps the audience out of theatrical complacency.

The Cast
PJ Moore came to the world of acting less than two years ago on the set of The Tudors as an extra. He went on to work in a number of short films made by GMIT students and others. The opportunity to attend Galway Community Colleges “Acting and Theatre Performance” course quickly followed. As part of this course PJ and his class devised produced and acted in their own show Easysingles. This course also provided him with the platform to make his stage debut as The Postmaster in The Government Inspector in Druid theatre. His most recent big role was Petey Meegan in the Town Hall Theatre’s summer highlight Tarry Flynn which ran for six nights to full houses on the main stage. This was quickly followed up with a ten week intensive course run by Core Theatre College. As well as work on the stage, This is his first role with Truman Town Theatre but he has also been gaining experience on TV in such varied projects as TG4’s 1916 Seachtar na casca and Lucky Run a pilot made for RTE’s Storyland.

Sean O’Maille is a native of Galway. With a background in Psychology, he made his acting debut in Father Music Theatre’s production of In the Beginning (2007). His acting career has been busy since then, having taken the lead in Genesis theatre group’s production of Pink Floyd – The Wall, with the special permission of Roger Waters. After some formal training his next three roles were the lead in Easysingles, The Magistrate in an adaptation of Gogol’s The Government Inspector. (Performed in Druid Theatre) and Father Antony in the much celebrated Tarry Flynn, which played to sell-out crowds in the main stage of the Town Hall for six nights. You can see him on screen as Soldier Charlie in the upcoming No Eye to Pity Her, Which deals with Cromwell’s forces in Ireland and also as Brendan Flood in the adaptation of Ken Bruen’s The Magdalene Martyrs, which is due out in the Spring. This is his first role with Truman Town Theatre.

Theresa Leahy studied acting at the Dublin School of Acting. Theresa has directed and acted with groups in north Clare including the Burren players where she played Miss Dee in Sharon’s Grave which after a successful run toured to Boston. Last year Theresa directed and acted in her own theatre company’s StoneMad Production of Kissing Sid James. In December 2010 Theresa co-directed with Mairead Ni Chonduin Canadh le Cheile. 400 children from 5 schools in County Clare had two unique concerts with original music and script. Theresa facilitates and directs the Clare Youth Theatre and has just staged their end of year show A Man’s Game at Glor, Ennis. This is her first role with Truman Town Theatre.

Cathal Leonard Having studied acting at Bull Alley in Dublin, Cathal has been working in theatre on and off for about for five years now. Having played the lead in classics such as Philadelphia here I Come, The Cripple of Inishman and Waiting for Godot, he considers himself an energetic actor, eager for new challenges and always delights in innovative work that contravenes conventional theatre. He comes from Ballinrobe and this is his first role with Truman Town Theatre.

Niamh Shiggins is from Wexford town and is currently doing a MA in Drama and Theatre at NUI Galway. Recently, she completed a course in Ensemble Acting and Devising with Max Hafler and workshops in corporeal mime, composition and repertoire with The Blue Raincoat Theatre Company. She is in the process of studying The Chekhov Technique and is also trained in modern dance and voice. She has previously worked with Oyster Lane Theatre group, Wexford Light Opera Society, Wexford Festival Opera and Mater Dei Drama Society. Her favourite roles, to date, include Rose – Dancing at Lughnasa, Angela – Bedtime Story, Abigail – The Crucible, Fiona Brigadoon and Ermengarde Hello Dolly. This is Niamh’s first role with Truman Town Theatre.

Conor Geoghan is from Galway started his acting career with Galway Youth Theatre in 2005, where he acted in many shows.In 2008 trained in Ecole Philippe Gaulier, in Paris. Some of the shows he acted in are This Means War, 2008, Bright Smoke Cold Fire(Project 2006), also The Tudors Channel Four (2007), The Dove and the Crow, It Won’t Be Great When I’m Not Here and Heroes: Freefall (TYGER Theatre Co.). 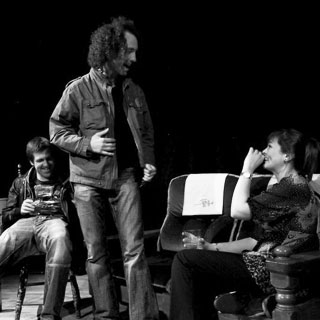