To listen to a feature about the production originally broadcast on RTé’s Arena programme click here.
Originally written and directed by Award winning playwright Enda Walsh, Bedbound premiered to immense critical acclaim at The New Theatre as part of the Eircom Dublin Theatre Festival in 2000. The play then travelled to the Traverse Theatre at the Edinburgh Festival where it won a Fringe First Award and a Critics Choice Award.

Bedbound runs at fever pitch, an exhilarating, violent and tragic interrogation of relentless ambition, pride and the price of success. In this whisky shot of a play, a life spent flogging three-piece suites and Swedish Pine furniture becomes both feverishly exciting and blackly comic. Aided by his polio stricken daughter, Maxie Darcy is bound in a perpetual cycle, re-enacting the most pivotal and horrific moments of his life as a ruthless and devious furniture salesman.

Dad: Fionn Ó Loingsigh has recently completed the 6 Month Advanced Actor Training Programme at the Abbey School of Music and Drama. Recent theatre credits include Bedbound, The Wonderful World of Dissocia, Death of a Salesman, and The Lonesome West, (Samuel Beckett Theatre), The Pillowman and Disco Pigs at Players Theatre, Trinity College, for which he was awarded Best Actor at the ISDA (Irish Student Drama Association) Awards 2009. TV credits include Hidden History: The Killings at Coolacrease (RTÉ).

Daughter: Sara Joyce is a graduate of Drama and Theatre Studies in Trinity College Dublin. While there, she performed in many productions in both Players and the Samuel Beckett Theatre some of which include Low In The Dark, East, Alice In Wonderland, An Irish Engagement, Little Shop of Horrors, The Skriker, The Government Inspector, Oh What A Lovely War. Sara was a member of the Gaiety Youth Theatre Company with whom she performed Macbeth in the Project Cube. She has also directed a number of productions including Cloud 9 (Players Theatre), The Wonderful World of Dissocia (Samuel Beckett Theatre) and Attempts On Her Life which was presented at The Flat Lakes Literary and Arts Festival. Sara will be attending the Ecole Jacques Le Coq in September.

Lighting Design: Dan Bergin is the theatre co-ordinator and co-founder of 10 Days in Dublin, Ireland’s only open format arts festival. He is the artistic director and co-founder of the design led production company Daguerreotype Ltd, whose first production Wozzeck was met with critical acclaim for its performance as part of the Dublin Fringe Festival 2009. Additionally, Dan has worked as a freelance technician, working as Chief LX for the Action Theatre in the San Francisco Theatre Festival 2008, as Lighting designer for performances as part of the TCD Director’s Debut Festival 2009 & 2010, and as Technical Co-ordinator for the Samuel Beckett theatre during the Irish Student Drama Association Festival 2010. Alongside his professional theatre practice, Dan is currently pursuing a PhD in Drama and Theatre studies in the ATRL (Arts and Technology Research Laboratory) TCD, which focuses on configurations of contemporary computer gaming, and live performance.

Set Design: Zia Holly holds a B.A. in Drama and Theatre Studies from Trinity College Dublin, where she specialised in lighting and set design. She has lit shows in Ireland and the UK, winning “Best Lighting” in ISDA 2009 for her work on Disco Pigs. Zia has worked with a wide variety of designers, including Paul Keogan (The Rivals, Abbey Theatre 2009 and Featherhead’s Slat, 2009) and Sinead McKenna (Calipo Theatre’s Pineapple, 2011) and held the position of Deputy Festival Lighting Designer along side Sarah Jane Shiels in this year’s Theatre Machine Turns You On, Vol. II. This is Zia’s 4th set design for Pillowtalk having designed for The Living End (10 Days In Dublin), Bedbound (Debut Festival ’10), and The Pillowman (Players Theatre). Recent lighting design credits include Room to Move Theatre’s Lovers, Talking Shop Ensemble’s I’m a Homebird (its very hard), and The New Theatre’s Reunion. Other design credits include her work on Engine Thirteen’s Paperboy, You Can Call Me Frances’ Greatest Hits, and Fitzgerald and Stapleton’s The Work the Work, all in the Project Arts Centre as part of the Absolut Fringe 2010, and Maria Tecce’s Strapless and Viva which were performed as part of the Edinburgh Fringe 2010 and 2009 respectively. 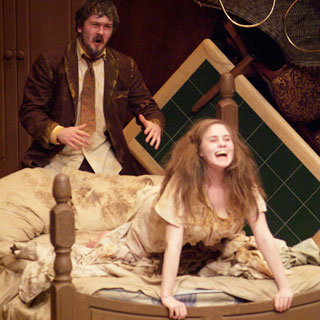 The New Theatre in association with Pillowtalk