This show is being held on the anniversary of Joyce and Nora Barnacle’s departure from Ireland.

Click here to hear a review of the show on RTÉ’s Area programme.
Joyced! looks back at 1904 through the eyes of JoJo, a stallholder in Dublin’s Rathmines Market with a dangerous obsession for all things Joycean.

JoJo careers through the full gamut of 1904 James Joyce:-
– his battles with his mad dad
– his bronze medal win for singing in the Feis
– a crazed night of gunfire in the Sandycove Tower
– his rescue from Monto mayhem by the man who became Bloom
– and his passion for Nora Barnacle and their fabled walk on 16th June

It is a chaotic, exciting, whirlwind odyssey through the people, events and year that Joyce would later famously recreate in Ulysses.
Earlier this year, Katie O’Kelly performed Joyced! at the Bloomsday celebrations in Oslo, Norway to rapturous applause. She will now perform an enhanced production of Joyced! for the New Theatre to commemorate the anniversary of James Joyce and Nora Barnacle’s elopement from Ireland to Europe. 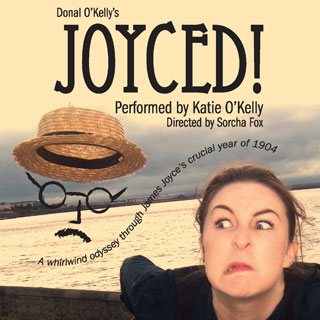