The Lesbian, Gay, and Bisexual Teacher’’ Association of Ireland was only launched a few years ago by a few brave souls, but they wont be showing this in a General Meeting! The film tells the story of teacher Frank Ripplo —played by the director, Frank Ripplo, a small hint about the autobiographical angle… He teaches Sex Education (this is Germany, remember?), and although his pupils adore him, he is a dubious role model.

Frank is an absolute slob in his personal habits, and an absolute sex-machine in his private life. No male flesh can pass him by without getting his attention, any time, any place, any position. He has one single

phobia: love. Frank runs away at the speed of light from anything requiring reflection or affection, and the word ‘commitment’ sends him into cardiac arrest. So what will happen when he meets Bernd, who is gorgeous, lovely, and monogamous? Taxi Zum Klo was filmed before the AIDS crisis, so there is not a condom in sight – some will see this movie as a celebration of a freer time, some as a document of human folly. 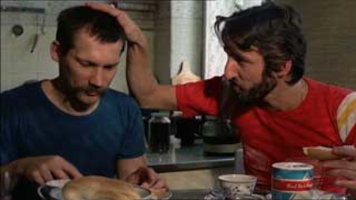