‘A great testament to the up-and-coming talents we have in this country…bodes well for the future of Irish Theatre.’ Le Cool Magazine
‘Intensely engaging…Performances were strong, believable and hypnotic.
Overtime is a must see this week for all theatre goers in Dublin’ Guide2Dublin

Performed by Gerard Byrne(L) and Stewart Roche(R)
John is having a bad night. Fact is, he’s been having a bad year. Pulling in extra shifts, staying late, in the office 24/7… But the work just keeps piling up and the job is getting tougher and tougher. And all the while that voice is telling him that maybe it’s him. Maybe he’s just not good enough.
Because, all of this wouldn’t be so bad if it weren’t for Frank. Frank-the face and name behind that voice. Frank, ever constant, always there. Watching on. Waiting.
But for all of John’s problems, if he let’s him and if he listens…Frank just might have a solution.
Overtime began its life as part of The New Theatre’s week of November Playreadings in 2011. Following the success of the reading and the subsequent positive feedback, it has been brought back for a full week’s run in July 2012.

About Jane McCarthy:
Jane graduated UCD in 2007 with a BA in ‘English Literature, Poetry and Drama’. Her first play, Epilogue which she wrote and directed, debuted in 2009 as part of The New Theatre’s first season of New Writing. While primarily a writer, she has also worked on many productions as Assistant Director, including The Quare Fellow (The New Theatre) 2010,Men are from Stoneybatter, Women from Phibsboro (Maylin Productions) 2009, 2010, Brian Cowen and the Seven Deadly Sinners (The New Theatre) andAirswimming (Idir Mná), 2011. In Feb 2012 she directed ‘Gloria’ as part of the collaborations Festival in Smock Alley. She is delighted to present ‘Overtime’ as a full production, following it’s performed reading in November 2011.

Stewart Roche (‘John’)
Stewart trained at the Gaiety School of Acting. He is the artistic director of PurpleHeart, with whom he has played Toby in Hollywood Valhalla, Taggart in Men of Tortuga, John inAfter Miss Julie, Davis in Red Light Winter, the Cop in How to Act around Cops, Lou inShooters, Potts in Mojo, Dave and Ray in Some Voices, Richie in Love and Understanding, Crowe in Never the Sinner and John in Coyote on a Fence. He has produced nearly all of PurpleHeart’s shows to date. For the company he has directed Helter Skelter/Union Square and The Santaland Diaries. Other theatre work includes King Lear (Second Age); Suburbia, American Buffalo and True West (Lughnasa);Valparaiso, The Quest and The Alchemist (Iomha) . Film and TV: About Adam, Stages, RiRa and 43.
Stage Manager: Fiona Keller
Lighting Design: John Crudden
Set Design: Phillipa Kavanagh
Music (composed and performed) by: Paul Simon McCarthy 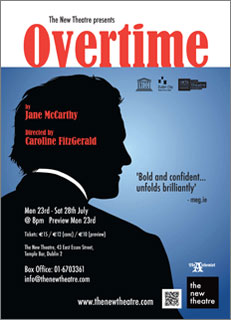