Home  /  Theatre   /   The Horse Trading Diaries
Back to events

St. Patrick’s week , 1965, Limerick city. A hotel owned by famed Irish rebel Michael Hurley is visited by Ernesto ‘Che’ Guevara, a world-famous revolutionary. For Frank, the hotel porter, things have never been so grim. The guests get stranger by the day: a horse trader claiming to be Guevara’s cousin, a mysterious holy man who sees apparitions, a translator with an ulterior motive… The hotel’s good name is at stake… hot water bottles are exploding, plots are being hatched… and everyone is in the crossfire.
Directed by James McNulty 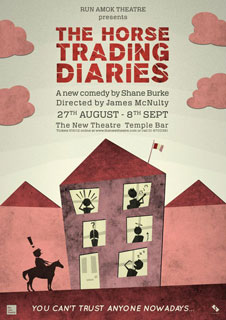