Family Voices / One For The Road

“There is only one obligation. To be honest…”
Fast Intent present a double bill of Harold Pinter plays in a brand new production.
Originally written for radio, Family Voices is a darkly comic coming of age story. We follow the strange encounters experienced by a young man leaving home for the first time and the family struggling to let him go. Staged with a twist on the radio play, Family Voices is a perfect insight into Pinter’s gift for creating unusual, uncomfortable but always entertaining comedies of menace.
One for the Road shows Pinter at his most political. We witness a series of interviews conducted by an official of an unnamed dictatorship. A family – father, mother and son – are interrogated by the menacing Nicholas. With the shattering of the family unit at its core, the play delves into the darkness at the very heart of our belief systems and tears at the moral and ethical structures we live by.

In putting these plays together, Fast Intent hope to remind us that politics are always personal and the personal is always political. These two very different texts share Pinter’s black wit and aptitude for linguistic nuance, as well as covering many of the themes that appear again and again throughout his body of work.
Directed and designed by up-and-coming director Sarah Finlay (The Lark, Ashes to Ashes), with lighting by Eoghan Carrick. The cast is made up of Daniel Costello, Patricia Malpas, James Mahon and David Byrne.

Graphic design by SteMurray (www.ste.ie)
Fast Intent was formed in late 2011 by director Sarah Finlay and actors Gerard Adlum and Nessa Matthews. Our debut production of Harold Pinter’s Ashes to Ashes was performed in The Complex, Smithfield in August of that year. Most recently our production of Jean Anouilh’s The Lark was performed to acclaim at Smock Alley, Dublin. 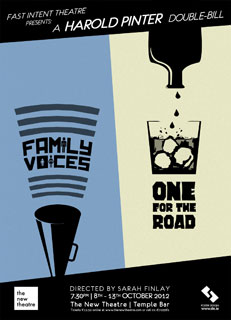