LENNON v McCARTNEY
Since the dawn of Time human beings have gathered in pubs and argued about who is greater – John Lennon or Paul McCartney. Now, finally, here at last, and not a moment too soon, is a short play that definitively sorts out the argument once and for all. Well… sort of…
LENNON v McCARTNEY was performed a number of times on the main stage at the Adelphi in Liverpool at the 2010 International Beatle Week. It has also been performed at the Scottish Beatles Weekend, the Flat Lake Festival, the Donegal Beatles Festival, the Project Arts Centre, Whelan’s, the Village, and many other places.
“Fabulously written and brilliantly acted. This is an acute observation of pub culture, pop culture and male friendship.” – Dublin Book Festival 2011.
Performed by Dylan McDonough and Jonathan Judge.

DEATH AND THE BEATLES FAN
How much would you know about The Beatles if your life depended on it?
DEATH AND THE BEATLES FAN is a new short play that takes a comic look at what happens when Death attempts to collect the soul of a hardcore Beatles fan who has no interest in dying.
“This really is the great stage play that The Seventh Seal could have been… if only Ingmar Bergman had been aware of The Beatles in 1957!” (Quote kindly supplied by a non-existent theatre critic.)
Performed by Dylan McDonough and Emmet Quinn.

JOHN LENNON’S LAST DAY
This piece is the most complete account of John Lennon’s last day that has ever been presented. It is not a play in the traditional sense – and is probably best described as a work of ‘documentary theatre’. Basically, with the use of a single actor, a simple stage set, some projected images and some very rare audio clips, this piece guides the audience through the strange and tragic events of John Lennon’s last day.
“My work won’t be finished till I’m dead and buried – and I hope that’s a long long time.”
Words spoken by John Lennon on Monday, December 8th, 1980 – just a few hours before his death.
Performed by Seamus Brennan.

VYVIENNE LONG
Vyvienne Long is a superb cellist and singer-songwriter who first came to prominence on the Irish music scene when she worked with Damien Rice on his albums O and 9. In 2006, Vyvienne released her debut EP, Birdtalk, which was a huge success and completely sold out within months. In 2010, Vyvienne reached a whole new audience when she released her excellent debut album, Caterpillar Sarabande, and appeared on television shows such as The Late Late Show, Other Voices and The View. Vyvienne has also built up an impressive reputation with her talent for covering other people’s songs – and her interpretations of The Beatles songs are nothing short of stunning.

THE NEWSPAPER TAXI MEN
The Newspaper Taxi Men are one of the very best Beatle tribute bands in Ireland. They have recently played brilliant support slots for John Lennon’s Original Quarrymen at the Village and Scotland’s Revolver at the Workman’s Club, and Yapperhead Theatre Company are thrilled to have them as part of The Beatles Show at the New Theatre. These guys are pure quality.

Directed by Stephen Kennedy.
The image for the poster was drawn by Dublin artist Georgina Flood. 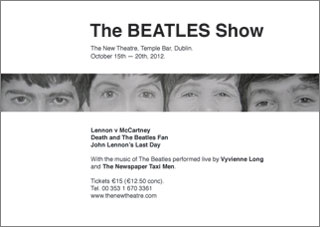