Is a winner of the New York Outer Critics Circle Award for Best Play, and tells the tale of friendship and courage – the clash between two damaged souls who both isolate themselves from the people they want to help – one by saying what he believes people need to hear and the other by saying only what people want to hear. Somewhere in the middle of their struggle they both find something and someone to believe in.

About Bill C Davis – writer / director
Bill C. Davis is the author of Mass Appeal, which premiered at The Manhattan Theatre Club, produced by Lynne Meadow, directed by Geraldine Fitzgerald, and starred Milo O’Shea. The play moved to Broadway where it received the Outer Critic’s Circle Award. Mr. Davis adapted the play as a screenplay and it was made into a movie starring Jack Lemmon and Charles Durning and was chosen one of the ten best films for that year by The National Board of Review. He also performed the role of Mark Dolson with Milo O’Shea, Charles Durning and Brian Keith. Mass Appeal has played in Paris, (L’Affrrontement) starring Jean Piat, where it received a Moliere Award. It has also played recently in Italy (Ultimo Appello), Poland, Brazil, Argentina, Sweden, South Africa and Australia and Munich, Germany (Der Priestermacher) and in Mexico (Alerta en Misa).
Another play, Dancing in the End-Zone, premiered at the State Theatre in Miami, directed by Jose Ferrer and starred Elaine Stritch. The play moved to Broadway under Melvin Bernhardt’s direction, with Pat Carroll. It was also performed in Los Angeles starring Lois Nettleton, where the play received a Dramalogue award.
His play, Wrestlers, had its premiere in Los Angeles, with Mr. Davis acting in it opposite Mark Harmon. The play was Critic’s Choice for the LA Times. The play was also staged at the Hudson Guild with the author, Dan Butler and Elizabeth Berridge in the cast and directed by Geraldine Fitzgerald. It has been translated to French and recently premiered in Belgium under the title Les Lutteurs.

Bill directed his play Spine in Los Angeles with Meredith Baxter and Mackenzie Astin, and also at The George Street Playhouse in New Jersey with Caroline Aaron and Justin Kirk. Spine recently received a workshop production at the Barrow Group in New York City.
Mr. Davis’ play Avow, premiered Off-Broadway at the Century Center for the Performing Arts under the direction of Jack Hofsiss after being presented in workshop at George Street Playhouse and the Director’s Company. Avow has been translated into German and French. Avow was revived in New York City in 2009.
With young composer Brett Boles, Bill has completed an original musical, Austin’s Bridge – which received a workshop
production at the Firehouse Theatre in Richmond Va. in summer 2007 which Mr. Davis directed. It was recently (2012) workshopped at Brooklyn College.
He has completed another new musical – Open For Me with composer Scott Perkins. In both works he has written book and lyrics.
He is also developing five new plays:

Expatriate – which received a workshop production in spring 2009 – with Tandy Cronyn at Manhattan Theatre Source and Mr. Davis directing.
All Hallowed was given a staged reading at the Writer’s Institute in Albany, N.Y.,William Kennedy executive director, and at Tri-Arts theatre in Sharon Ct. and at The ArcLight Theatre.
The Sex King received a workshop production at Carnegie-Mellon in Pittsburgh and at the Berkshire Playwrights
Lab in Great Barrington, Ma. in summer 2009. It is currenly under option by Jeff Lee, Michael Rose and Barbara Broccoli for Broadway, with new title, Jeremiah Rules.
Coming2Terms was produced in summer of 2011 at Vineyard Playhouse in Martha’s Vineyard under Mr. Davis’ direction.
His most recent play – Household Accounts – was given a workshop reading at Brooklyn College, May 12, 2012.
For Robert Greenwald Productions he adapted a novel for CBS television The Secret Path – which starred Ossie Davis and Della Reese.

He has just completed a novel – Connecticut Wildlife. 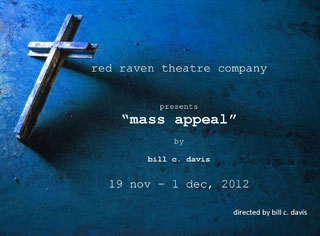