Apples is a play about sex and the city when you’re 15.
It has toured UK and was winner of the coveted Herald Angel Award at the Edinburgh Fringe Festival.
Twisted Focus’ production takes the gritty yet comic fairytale and sets it in Dublin.
After its sold out run in RI-RA, Twisted Focus are delighted to be bringing Apples back to the The New Theatre.

About Twisted Focus:
Twisted Focus was founded in 2011 by a group of petrified theatre makers (Anna Clifford, Nicola Lucey, Clare Monnelly and Caoimhe O’Malley) in a closet sized office in The Gaiety School of Acting, Sycamore Street, where their over enthusiasm led them to believe they could conquer the world despite having very little clue how to!
Twisted Focus are dedicated to staging contemporary, thought provoking work and are proud to be bringing our production of Apples to The New Theatre stage. 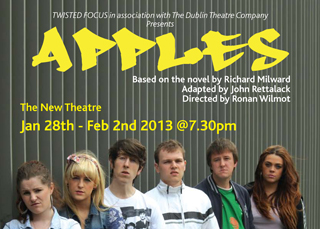 adapted by John Retallack (from the novel by Richard Milward)

Twisted Focus in Collaboration with the Dublin Theatre Company