John is having a bad night. Fact is, he’s been having a bad year. Pulling in extra shifts, staying late, in the office 24/7… But the work just keeps piling up and the job is getting tougher and tougher. And all the while that voice is telling him that maybe it’s him. Maybe he’s just not good enough.
Because, all of this wouldn’t be so bad if it weren’t for Frank. Frank-the face and name behind that voice. Frank, ever constant, always there. Watching on. Waiting.
But for all of John’s problems, if he lets him and if he listens…Frank just might have a solution.

Overtime began its life as part of The New Theatre’s week of November Playreadings in 2011, and was staged for a full week’s run in July 2012. Following glowing reviews and positive feedback it returns to The New Theatre for just two weeks.

About Jane McCarthy:
Jane graduated UCD in 2007 with a BA in ‘English Literature, Poetry and Drama’. Her first play, Epilogue which she wrote and directed, debuted in 2009 as part of The New Theatre’s first season of New Writing. While primarily a writer, she has also worked on many productions as Assistant Director, including The Quare Fellow (The New Theatre) 2010,Men are from Stoneybatter, Women from Phibsboro (Maylin Productions) 2009, 2010, Brian Cowen and the Seven Deadly Sinners (The New Theatre) and Airswimming (Idir Mná), 2011. In Feb 2012 she directed ‘Gloria’ as part of the Collaborations Festival in Smock Alley. She is delighted to present ‘Overtime’ again, following it’s performed reading in November 2011 and successful run in July 2012.

About Caroline FitzGerald:
Caroline FitzGerald was Resident Director and Assistant Artistic Director at the Abbey Theatre in the early 1990s where she specialised in new work by well known and emerging playwrights, including Boss Grady’s Boys, Prayers of Sherkin and White Woman Street by Sebastian Barry; Triptych, The Invisible Man and O Ananias, Azarias and Miseal by Jennifer Johnston; Blinded by the Light by Dermot Bolger; Frauds by Fergus Linehan; and Joyicity by Ulick O’Connor.

Caroline’s most recent productions include Baglady by Frank McGuinness at the Focus Theatre and on tour; According to Sydney by Gerry Lynch (Mill Theatre, Dundrum); Jo Bangles by Dave Lorden (Focus), Billy the Boat Loves Angelina by Isobel Mahon (New Theatre); Is there Balm in Gilead by Michael Harding (Bewley’s Cafe Theatre); Des and Rosie at Large (Pavilion Theatre). Other recent works include Submarine by Ulick O’Connor (2006);
Requiem of Love by Patricia Burke-Brogan (2007); Waiting by Jennifer Johnston (2006); The Sancturary Lamp by Tom Murphy (Galloglass Theatre Co, Clonmel and national tour); Moonlight and Music by Jennifer Johnston (Pavilion 2005); Des and Rosie on the Loose (Pavilion 2004); Des and Rosie on the Luas (Gaiety, 2005).

Other recent productions include The Desert Lullaby by Jennifer Johnston (GTC); The Ghost Show by Fergus Linehan (Bewley’s Cafe Theatre) and Fred and Jane by Sebastian Barry. Other productions include The Unexpected Man by Yazmina Reza (Pavilion ); Stained Glass at Samhain by Patricia Burke Brogan (Town Hall Theatre, Galway) and A Delicate Balance by Edward Albee (Focus Theatre).

Stewart Roche (‘John’)
Stewart trained at the Gaiety School of Acting. He is the artistic director of PurpleHeart, with whom he has played Toby in Hollywood Valhalla, Taggart in Men of Tortuga, John inAfter Miss Julie, Davis in Red Light Winter, the Cop in How to Act around Cops, Lou inShooters, Potts in Mojo, Dave and Ray in Some Voices, Richie in Love and Understanding, Crowe in Never the Sinner and John in Coyote on a Fence. He has produced nearly all of PurpleHeart’s shows to date. For the company he has directed Helter Skelter/Union Square and The Santaland Diaries. Other theatre work includes King Lear (Second Age); Suburbia, American Buffalo and True West (Lughnasa);Valparaiso, The Quest and The Alchemist (Iomha) . Film and TV: About Adam, Stages, RiRa and 43. 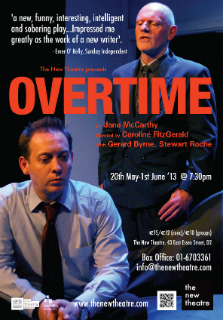