Lockout is a new play from writer Ann Matthews. It tells the story of Ellen, a mother who fights for a way out of poverty while around her James Connolly and James Larkin battle for a way through the corruption created by the wealthy classes. Now for the first time, as Ellen talks, we hear the story of the Lockout from the hitherto voiceless and unsung heroes: the working class wives and mothers of Dublin.

This play is part of Dublin: One City One Book and is presented with the assistance
of Dublin UNESCO City of Literature 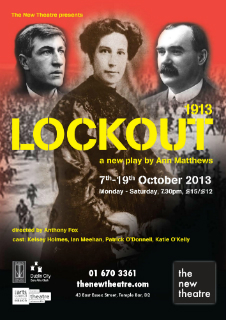