Set in present day Ireland, this adaptation is based on Tolstoy’s short story The Devil, written in 1891. The story, about a wealthy young landowner and rising official who is driven insane by sexual temptation when he becomes obsessed with a peasant girl after an affair, is loosely based on Tolstoy’s own experience during his unhappy marriage.
Adapted to modern day Ireland and changed from a third person narrative to a first person monologue, Eugene is a wealthy man who is reluctantly running in the local by-election after his Father dies. We follow his hopes and desires that lead to a fatal act. His cold hearted reliance on logic mixed with obsession cause his mind to disintegrate.

About the Company
AC Productions celebrate their 10th year with this production. It is their first adaptation. The company regularly produce classic drama by Shakespeare, Beckett and Pinter. The company have toured all over Ireland and to London, Brussels, Prague, Singapore and Hong Kong with their productions.

Neill Fleming has worked several times with AC Productions. Most recently on Dario Fo’s ACCIDENTAL DEATH OF AN ANARCHIST and TWELFTH NIGHT. He also performed in their productions of MUCH ADO ABOUT NOTHING and PINTER X 4. He has a lead role in the upcoming feature film release THE HIT PRODUCER and is currently featured in Fair City. 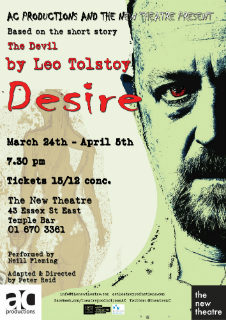 Adapted from Tolstoy by Peter Reid

AC Productions in association with The New Theatre