The show has chronicled it’s own creation, from inception, to opening night on Broadway. It tells the story of two writers, Jeff and Hunter trying to write a musical about two guys writing a musical. They then enlist the help of their two friends Heidi and Susan.

Their relationships are put to the test when the pressures of show-business put a strain on their work. The show is about not being afraid to follow your ambitions and dream out loud while still maintaining a respect for your loved ones, and yourself while doing so.

About The Company
Ill-Advised Theatre Company is a brand new theatre company based in Dublin set up with the goal of bringing high quality and professional musical theatre standards to the Dublin stage with a fresh, young twist.
We’re committed to bringing shows that you wouldn’t see performed too often in Dublin from around the world. This will be Ill-Advised’s premier full-scale production. 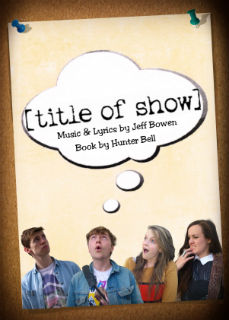 Written by Hunter Bell and composed by Jeff Bowen