The Motherfucker With the Hat

Home  /  Theatre   /   The Motherfucker With the Hat
Back to events

Struggles with addiction, friendship, love and the challenges of adulthood are at the center of the story.

Set in New York, the play is a funny fast-paced foul-mouthed story about feuding childhood sweethearts. Newly released from prison and struggling to remain sober, Jackie has reunited with his longtime girlfriend, a crack-smoking live wire named Veronica. Jackie leans on his addiction sponsor, the mellow-talking, stay positive Ralph D who tries to keep Jackie from blowing up, but ultimately proves himself to be a very poor advisor indeed.
Meanwhile, Ralph is having his own challenges with his ‘in-recovery’, ball-busting wife Victoria who sees Ralph for the dog he really is. Outside this maze of addiction and recovery stands Jackie’s loyal cousin, Julio who agrees to help Jackie in his quest for revenge despite a history of Jackie’s ill and often hurtful treatment of him. 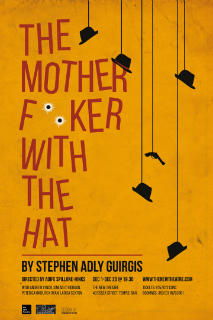