As a girl among a poorish family in the countryside, Tish saw a future when observing elegantly parading women in the enclosures at The Curragh Races. “Like giraffes on grass”, informed her mentor Jimmy, tutoring her in the requisite skills. Then a step too far….
Harry sought shelter from the world via a marriage to a strong woman, – until again, a step too far…
When they meet, it’s with a chance to redeem the past. But old habits die hard….

About the author
Kevin O’Connor has written for theatre, radio and tv.
His play on an incident in the Paris years of Picasso featured in The New Writing showcase at The New Theatre. 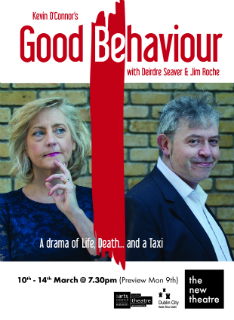 Written and directed by Kevin O'Connor