Three contrasting plays by W.B. Yeats in an evening of great entertainment.
The Pot of Broth, a lesser known comedy. It tells the tale of a tramp, with nothing but a stone in his pocket, who manages to hoodwink a penny-pinching woman into filling his belly with tales of magic properties that the stone possesses.

The second play, The Cat and the Moon, will be in performed in the Irish Language: An Cat agus an Ghaelach, in a brand new translation by the world renowned poet and translator Gabriel Rosenstock.

The third play is Purgatory, a verse play, one of Yeats’s last works: desolate and unforgiving, played with great energy and fire.
Mouth on Fire will bring its characteristic precision to bear on this production, employing highly skilled actors, once again making great Irish writing accessible to a wider audience.
Mouth on Fire has commissioned the world-renowned translator Gabriel Rosenstock to ‘transcreate’ The Cat and the Moon into the Irish language. This will be a world premiere, making, in this the 150th anniversary of his birth, Yeats’s work relevant and accessible to all, Irish or otherwise, for 2015 and beyond. It is a way of breathing fresh life into the text for the immediate present, reigniting attention in the play not just for scholars but for all those interested in Yeats’s writings.
There will be no interval. 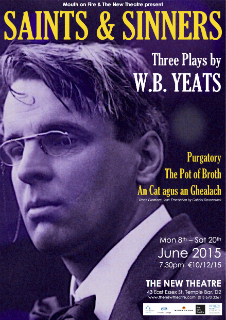 Mouth on Fire and The New Theatre