Get that cocktail shaker.

Throw in, (a), a passionate but unsatisfied housewife, (b), a selfish womaniser husband, and (c), a truck-driving free-spirited lesbian. Add a yearning for love, the need for adventure, and the lure of parenthood. Sprinkle with an unpredictable plot, laugh-out-loud scenes, and prickly social satire. Shake well, and serve on pitch-perfect performances.

This remarkable film was, quite remarkably, the brain-child of a heterosexual woman, Josiane Balasco, who wrote, produced, and directed French Twist… and also starred in it, as the unforgettable uber-butch Mary Jo. Co-starring, Victoria Abril, surely one of the best actors of her generation (catch her in another comic queer role in 101 Reikiavik), proving here that she can play high farce with as much conviction as postmodern mascarade (check out her Almodovar films), or helfty drama.

Gauzon Maudit starts with three stereotypical characters, and slowly forces them and us to shift out of these safe-and-set identity roles. One of the most shamelessly entertaining lesbian films ever made, this is also a thinking film, happy to redefine both ‘family’ and ‘queerness’. 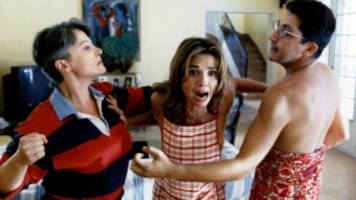