“I still remember what you look like, Tekla. Under those nice clothes.”

In a holiday hotel by the sea, Adolph anxiously awaits the return of his new wife, Tekla, and finds solace in the words of a stranger.
Creditors, by Swedish master playwright August Strindberg, is a darkly comic sexual triangle. David Greig’s razor-sharp translation captures the thrilling intimacy of this examination of seduction, betrayal and the ways we never let go.

Directed by Aoife Spillane-Hinks (The Motherf**cker with the Hat, Pilgrim)
With:
Ronan Leahy (Oedipus, An Enemy of the People)

About the Company
C Company was founded in London in 2006, when ten actors joined forces to produce plays where the actor is at the heart of the work. Aiming to break the constraints of artifice, we strive to give our audiences actual life in all its thrilling unpredictability. We bring a creative, collaborative approach to the classics and to developing new plays, with the simple aim of inspiring our audiences to feel, think, and enjoy.
Previous productions include the London premiere of Mark O’Rowe’s From Both Hips, Shakespeare’s Macbeth in a prehistoric cave labyrinth, and Chekhov’s The Bear. 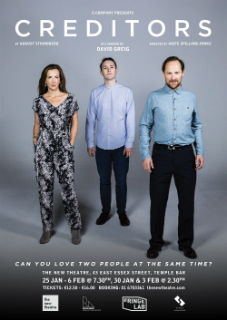 by August Strindberg in a version by David Greig