“O’Farrell is played by Amy O’Dwyer…she has an ability to sink into the role, becoming it in a way that makes her look different, even physically different….It is convincing. Not to mention promising, helped by the stark grey and black of Orla Reynold’s set.”

“..engaging”
“..firing on all cannons..”
“O’Dwyer and Coyle work well together as Clodagh and Harry”

Following the launch of the 1916 commemoration, Clodagh O’ Farrell, a senior captain from Army HQ recently returned from Lebanon, attempts to coordinate the military aspect of the celebration, despite the objections and competing agendas of forces within the Government.
Will Clodagh succeed or will Stephanie and her bosses get what they want. And just whose team is spin-doctor Harry playing for? 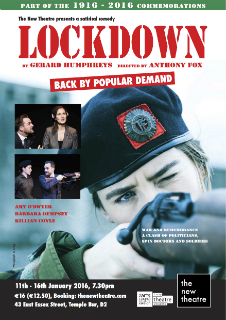