When John takes a break from his boyfriend, he accidentally meets the girl of his dreams. Mike Bartlett’s award winning comic drama is a sharp, punchy exploration of the complexities of modern day relationships.

Mike Bartlett’s tart and witty story takes a playful, candid look at one man’s sexuality and the difficulties that arise when you realise you have a choice. This is the Irish premiere of a play which won the 2010 Laurence Olivier Award for Outstanding Achievement. Bartlett has gone onto international success with his play, ‘King Charles III’ (also an Olivier award winner for Best New Play) in London and on Broadway. He recently wrote the massively popular BBC TV series, Doctor Foster.

The play’s Director, Geoff O’Keeffe said, “This is an intensely visceral and deeply probing examination of identity politics, where choice becomes a disabling force and where indecision cuts deeply and painfully. It is often hilarious, sometimes deeply sensual and always hugely satisfying. Cock is a battlefield where the verbal punches leave the air charged with the detritus of love, loss and longing.”

About Blue Heart Theatre
Blue Heart Theatre in an exciting new company that seeks to present the best of international theatre to Irish audiences and to commission new work by emerging Irish writers. 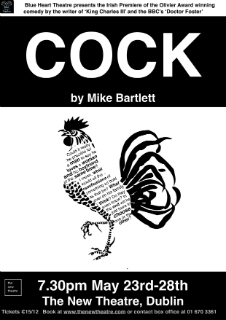