2013 adaptation of Hot in Pursuit, a volume from the autobiography of Violette leduc, published in 1970.

To prepare this season of the Film Qlub, we began by selecting the films, and then we went to the sources they had been adapted from. This brought a few surprises. To read Violette Leduc for the first time was a shock. What an exquisite writer –and why hadn’t we read her before? She takes life in her cupped hands, without spilling a drop. By the second page of Mad in Pursuit, the third volume of her autobiography, you know that Leduc may be a quavering insect in her daily interactions, but with a pen in her hand she is a colossus, invincible and immortal.

In addition to an x-ray-precision self-portrait, Mad in Pursuit includes a number of off-guard sketches of key 20th century writers and artists such as Jean Genet, Jean Cocteau, or Natalie Sarraute. The film (rightly) sidelines them in order to focus, like the text had done, on Violette’s relationship with the novelist, philosopher, and feminist powerhouse Simone de Beauvoir.

Leduc’s poetic language can not be translated into film. That’s why another adaptation of her autobiographical writings, the lesbian film Therese and Isabelle (which left our seasoned Qlubbers blushing when we screened it in 2013), incorporated long direct quotes from the original book.

Director and scriptwriter Martin Provost’s biopic Violette, humbly bows to literature by dividing the story into ‘chapters’. But his film can give us things the book can not: the opportunity to see these people made flesh by outstanding actors, those carefully composed images of stretching and contracting spaces, and a priceless sketch of a different Simone de Beauvoir.

In the film, we see de Beauvoir not as her devoted Violette saw her –glowing in the perfection of her intellectual rigour, her hermit’s generosity, and her miraculous tower of rolled-up hair–, but as a sometimes emotionally frail, and sometimes lonely woman. 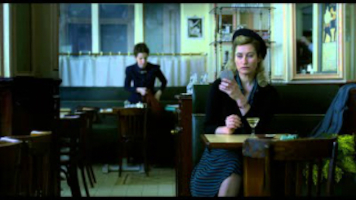