The Fish Child is an adaptation of the director’s own novel of the same title. The novel is told from the point of view of a dog. We have had dog-narrators before, in the novel Flush (1924), by the wonderful Virginia Woolf, and also in film, in Jean-Luc Godard’s latest experimental feature, Goodbye to Language (2014). In Puenzo’s book, ‘Serafín’ the dog is not just a gimmick, because he develops and changes throughout the story like the other characters. However, in the last few chapters of the novel, the narrator begins to slip into describing the thoughts of the characters –impossible for a dog, no matter how strong its bond to humans may be. The book couldn’t sustain the unified voice, but the film was unburdened by that problem. The lush but raw visuals, and a rhythm running-on-all-fours, bring cohesion to the story.

The Fish Child is about the awkward young white woman Lala, living a life of idleness in a wealthy suburb of Buenos Aires, and her falling in love with the Guaraní indian live-in-servant Guayi, a kind young woman shackled by a traumatic event. In the film, told through conventional-objective camera, ‘Serafín’ the dog plays a very small part in a sweeping story of all-consuming love, messy and irresponsible teenage needs and resolutions, and the demands made by a sickened world. In this lesbian thriller-romance, the world is less plagued by homophobia than by racism, by the exploitation of women, and by the omnipresent class privilege. Can we dare to hope for connection, support, and honesty, or is that a murky fairy tale? 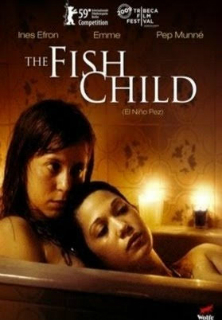