Home  /  Theatre   /   The Pleasureometer
Back to events

The Shutdown has closed the Pub. A group of habitual
patrons may never meet again. Their relationship was
dependent totally on the Pub. So close were they and so
regular that other patrons dubbed them The Club.
The Narrator, one of the group, describes the relatively
mundane evenings that were galvanised by the visits of
Himself, a larger-than-life figure who comes always with
some new idea about which he is passionate. The closing
of the Pub interrupts a scientific experiment. Himself has
invented a gadget for testing a student’s response to Poetry,
solving the problem that students who garner high marks in
exams often hate the poems they are studying. The gadget
can enable isolated testing too. The experiment appears to
be working, but the Narrator has an insight into its success,
which he withholds in order to enjoy the comic outcome on
another night. But the Shutdown now means there may
never be another night or a comic outcome.

ABOUT THE AUTHOR
Acclaimed playwright, novelist and short story writer, Jack Harte’s novel In the wake of the Bagger was nominated in Des Kenny’s book as one of the 101 Irish Books You Must Read. His fiction has appeared in 13 languages. Harte made his debut as a playwright in 2015 with Language of the Mute (New Theatre) which toured nationally in 2016. This was followed by The Mysterious History of Things (Viking Theatre, 2016) and Lugh and Balor performed in Greek translation at the Ancient Theatre of Maroneia and the Theatre of Komotini in Greece (2016). Killing Grandad, his most recent play, premiered in the New Theatre in March 2020.

ABOUT THE ACTOR
Gerard Lee is an actor, writer and director who has worked extensively in theatre, radio, television and film for over thirty years. Film & TV includes Father Ted (C4) Killinaskully (RTE) Vicious Circle (BBC) Mattie (RTE) Striking Out 2 (RTE) Proof 2 (RTE) Fair City (RTE) Red Rock (TV3) Hardy Bucks (RTE) Vicious Circle (BBC) Angela’s Ashes, Rough Diamond (BBC) The Man Who Invented Christmas, Mother’s Day (BBC) and Quantico (ABC). He has performed in theatres all over Ireland, including in Garter Lane in Jim Nolan’s The Salvage Shop, at the Abbey Theatre in their acclaimed production of Tom Murphy’s The House and Field Day’s Uncle Vanya (with Stephen Rea) in the Tricycle in Kilburn and the Gate. Gerard performed in his own play Mangan’s Last Gasp at Bewley’s Café Theatre, where he played the enigmatic Dublin poet James Clarence Mangan.

Gerard’s directing credits include Declan Gorman’s Dubliners Dilemma, based on the correspondence between publisher Grant Richards and James Joyce on the publication of Dubliners. The play toured widely, including to the US, Mumbai, the Tolstoy Museum in Moscow and the Ibsen House Museum in Oslo. Gerard also directed Declan Gorman’s recent play Falling Through the Universe, which looks at a young artist’s discovery of Joyce’s story The Dead while living away from his native Ireland. Other credits include Gotta Get A Gimmick and Out On Thursdays at Bewley’s Café Theatre, and his own Joyce-themed play SirenSong for the Trieste Joyce School 2019. More recently Gerard directed Jack Harte’s Killing Grandad at The New Theatre.

Gerard has an M Phil in Creative Writing from the Oscar Wilde Centre in Trinity College Dublin, and his debut novel Forsaken is published by New Island Books. Several of his plays have been produced, including Mangan’s Last Gasp and A New Day, both for Bewley’s Café Theatre, SirenSong in Trieste, This Old Man at the Viking, Unlucky for Some at Theatre Upstairs and One Is Not Oneself at the New Theatre. 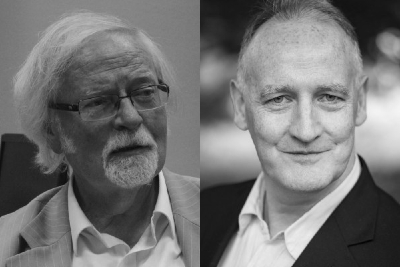