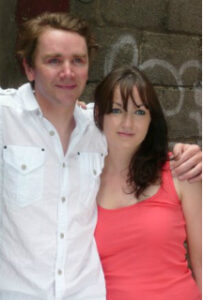 Five years ago, Jane McCarthy, a graduate of English at UCD joined The New Theatre Team. She showed great interest in playwriting and gaining knowledge in all aspects of theatre from directing, lighting, PR, and running a theatre.
Eighteen months into her official job as Front of House Manager she wrote and directed ‘Epilogue’ a fascinating play that showed a unique talent. The New Theatre gave full support to her first play as we endeavour to do with all new writers, helping to produce and offering any help that will make their production a happy and successful experience.
In 2011/12, Jane further challenged herself with a play about two men. It’s an aspect of theatre that we need more of – plays about the male written from a female perspective. This play, her second, ‘Overtime’ became a critical and audience hit – ‘a new, funny, interesting, intelligent and sobering play…reminiscent of Mamet, but I would argue that it’s a lot more credible than Mamet, because it has humanity.’ – Emer O’ Kelly, The Sunday Independent.
Before her play had finished its second run, she applied to the Creative Writing MA Course in the School of English, Drama and Film at University College Dublin. Accepted a few months later by UCD, Ms. McCarthy reluctantly handed in her notice at The New Theatre and thus began another exciting journey under the tutelage of many esteemed writers such as James Ryan, Eilis Ni Dhuibhne, Paul Perry and Frank McGuinness.
We wish Jane all the luck that she deserves in carving out a solid career, look forward to seeing her next play and hope that someday she might allow us the pleasure of seeing her work on The New Theatre stage again.
Mise le meas
Anthony Fox