An evening with Oscar winner Glen Hansard and Ronan Wilmot

Glen Hansard and Ronan Wilmot talk about their upcoming show

To listen to the RTÉ Arena clip, click here.
This show is a fundraising event for The New Theatre.
The lovely association between Glen and Ronan is that Ronan gave Glen and his band The Frames their first ever gig at the 1990 Clifden Country Blues Festival Ronan subsequently went on to manage The Frames in their early days.

The first part of the evening will consist of Ronan Wilmot performing Sean Lawlor’s play The Watchman first seen in 1988 at The Peacock Theatre with Johnny Murphy. The play is set on Wood Quay with the Night Watchman on his last stint after 37 years as a Watchman. He tells of his life, his city, its history and the characters he met on that solitary occupation.
Ronan Wilmot writes:
In 1988 Dublin was a thousand years old and Sean Lawlor wrote and directed The Watchman. Martin Fahy, the then general manager of The Abbey Theatre gave us, (Portrait Theatre Company), The Peacock Theatre at lunch time to put it on, Carmel White was our publicist and I was the producer. John Colton designed the set, Johnny Murphy played The Watchman. It was a very special piece of Theatre. Now it is only right and fitting to honour Sean’s writing, Carmel’s life and Johnny’s genius and retell the story of a Dublin that has vanished.
Director: Anthony Fox
Set Design: Lisa Krugel
Lighting Design: Nell Connelly
Poster Design: Leanne Willars
Publicity: Cathriona Flynn – 087 7562 063

Glen Hansard will perform his own songs.
Ronan Wilmot writes:
In 1989 Seamus Burke, David Griffin and I started The Clifden Country Blues Festival. In 1990 my daughter Siobhan was going out with this young musician and the both of them used to be in my apartment from time to time. Well one night he sang me some of his songs on his guitar – there and then I asked would he and his band like to play The CCB Festival in 1990? So on the Saturday afternoon of the Festival, we went over to Humanity Dicks in Clifden, the venue they were to play in that night. I heard them play The Dancer which became their first single. I subsequently managed The Frames and now Glen Hansard is kindly supporting The New Theatre. Did I think that Glen Hansard would reach the dizzy heights he has reached with his Oscar for the film Once? Absolutely. 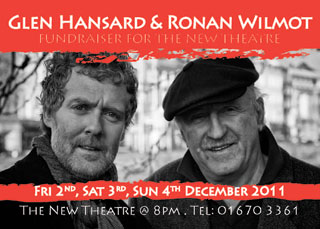