Ambrose Keogh works for Shell. When the Tunnel Boring Machine he named Fionnuala sinks into the bog in Mayo, he is magically confronted by Fionnuala, the swan-child of the ancient legend The Children of Lir. Fionnuala puts a geas (spell) on him.
He’s bound to tell what he knows about potentially lethal attacks on local opponents of the Shell Mayo gas project. During his ordeal, Ambrose meets his school classmate Malachy, an anti-pipeline activist, and echoes from the past resound.

Supported by the Justice and Human Rights Organisation AFRI. 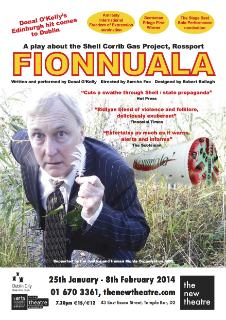