You need to find the perfect “Johan”, the protagonist for your film, and gawd knows there are many many possible candidates…
Each more gorgeous than the next. Every one of the auditioning ‘actors’ is given different lines and filmed in a different context and in a different style, so that, very slowly, this patchwork of ‘screen tests’ begins to take a life of its own before our eyes.

Meanwhile, the director is looking for the real ‘Johan’, who inspired his movie-within-the-movie in the first place, and as he searches for him he meets a few peculiar characters…
This film is cheeky, experimental, fresh, wired, fun, more clever than it looks, more beautiful than it intends to be. I addition to all that, it is also a curious mixture of documentary and fiction… Look out for the film director forcing his own mother to out him on camera.
Mad times! 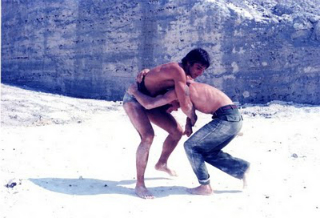