Fun, fast paced and fearless, ‘Save + Quit’ tells the powerful and empathetic stories of four humans.
‘Save + Quit’ was chosen as the winner of the London Student Drama Festival 2015 and has recently returned from a hugely successful ***** run at the Edinburgh Fringe Festival and VAULT Festival in London.

Two lonely Londoners and two dispirited Dubliners share glimpses of their city lives, re-enacting all their diverse daily encounters. No set, no props – simply four humans exploring the isolating effects of grief and urban life.
Witty yet moving, this energetic four hander about city school systems, ethnic barriers and transport costs is especially timely given the refugee crisis, Brexit and the centenary of the 1916 Easter Rising.

With fast paced multi-roling and brave, compelling storytelling, ‘Save + Quit’ speaks to the audience, encouraging them to reach out and connect with one another despite – or perhaps because of – the seemingly indifferent and often hostile nature of city life.
Directed by Billie de Buitléar. 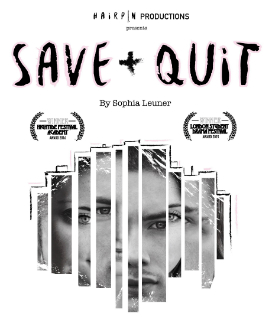