Down And Out In Paris And London

DOWN AND OUT IN PARIS AND LONDON by George Orwell, Adapted by Phelim Drew is a show that tells the story of a man, living in Paris, and determined to make a living as a writer. All does not go well however and the adventures, he is forced by his circumstances to recount, are the beginnings of a life in poverty. At times funny and entertaining, from meeting a host of wonderful characters to slaving in Hotel and restaurant kitchens and finally to tramp the streets of London it also peppered with the poignant realities of being “At last, genuinely, down and out”.

A man drifting through life, in 1920’s Paris, scraping by in dead-end jobs and generally soaking up the rich underbelly of Parisian life, finds himself falling helplessly short and discovering a very different view of life, looking up from below. With a keen understanding of social inequality and a wry sense of humour, he vividly recounts his experiences while down and out.
This powerful performance from Phelim Drew brings Orwell’s classic to the stage with humour, empathy and wit.

Down and Out in Paris and London premiered in Dublin Fringe 2014 as part of Show in a Bag, an artist development initiative of Dublin Fringe Festival, Fishamble: The New Play Company and Irish Theatre Institute to resource theatre makers and actors.
Down and Out in Paris and London by George Orwell (Copyright 1933), by permission of Bill Hamilton as the literary executor of the Estate of the Late Sonia Brownell Orwell. 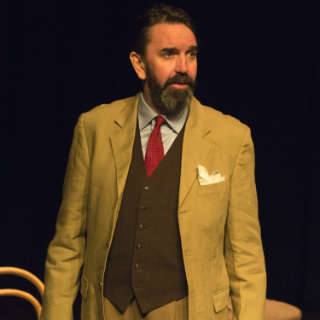 presented by CDM & The New Theatre